In September 2019, President Sebastián Piñera announced the US$5 billion “Chile on Rails” program, which was and still is destined to be the countries largest ever railway investment.

The program consists of 25 projects and over 1,000 kilometers of railways that will triple the number of users to 150 million by 2027 and double cargo capacity to 21 million tons.

The goal of the Chile on Rails program is to increase passenger and freight services, renew the entire train fleet; and consolidate the countries state-owned rail company EFE as a healthy and sustainable company.

In 2020, with the spread of Covid in Chile, EFE had a 53% drop in the number of passengers transported, which resulted in a 45% decrease in revenues. Many thought the program would be scaled back or cancelled.

The opposite was true. Even with the pandemic, EFE managed to ensure the financial sustainability of the “Chile on Rails” program. The company was able to successfully issue its first international bond at the lowest rate ever for a Latin American company for a 30-year maturity. The company raised US$500mn in New York at an annual rate of 3.068%. In addition, they opened a credit line with the World Bank for a sum that will range between US$400mn and US$800mn.

EFE’s General Manager, Patricio Pérez, was quoted saying that “despite the financing restrictions we’ve faced, this year we’re working on an investment plan for US$350mn, which is 75% more than the resources considered last year. Although we’ve changed the dates of some tenders, the processes are generally continuing according to the original schedules.”

Then last week, the government announced the start of one of its largest portfolio projects, the USD$1.5b Santiago-Melipilla train. This project alone would double the ridership of EFE. 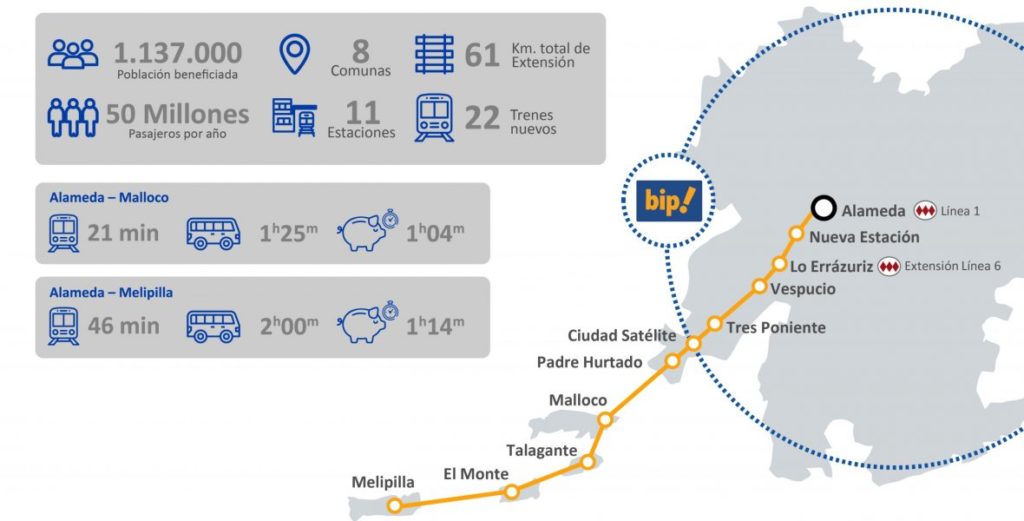 The new railway service, which considers a total investment of US $1.5 billion will come into operation in 2026, will benefit more than 50 million passengers per year and will reduce, by more than two hours, the travel times of the inhabitants of eight communities in the Metropolitan Region.

The project was created in response to the immediate need to have an alternative to public bus transportation that reduces travel times and costs. The project will decongest the streets and avenues in the south-west of Santiago. It is expected that a passenger train replaces eight passenger buses and 480 cars. This implies recovering up to 22 days a year for those who will travel daily between Santiago and Melipilla communities. In addition, the new service will be the largest by EFE and will double the number of passengers transported per year by the company.

After the approval of the Environmental study, EFE is now beginning the bidding processes for the first works of the project.

The first works will be the construction of the Talagante bridges, which crosses the Mapocho River; the Vespucio Sur bridge in Cerrillos; the Zanjón de la Aguada and Autopista del Sol bridges, in Central Station; and the bridges over the San Miguel and El Paico channels in Talagante.