Over the past 25 years, Chile has made key investments in infrastructure which has helped fuel the countries growth and ensure the country was competitive in the global economy.  The most well-known investments over the past two decades have been in the highway network and port system but the country has considerable successes that are worth mentioning – 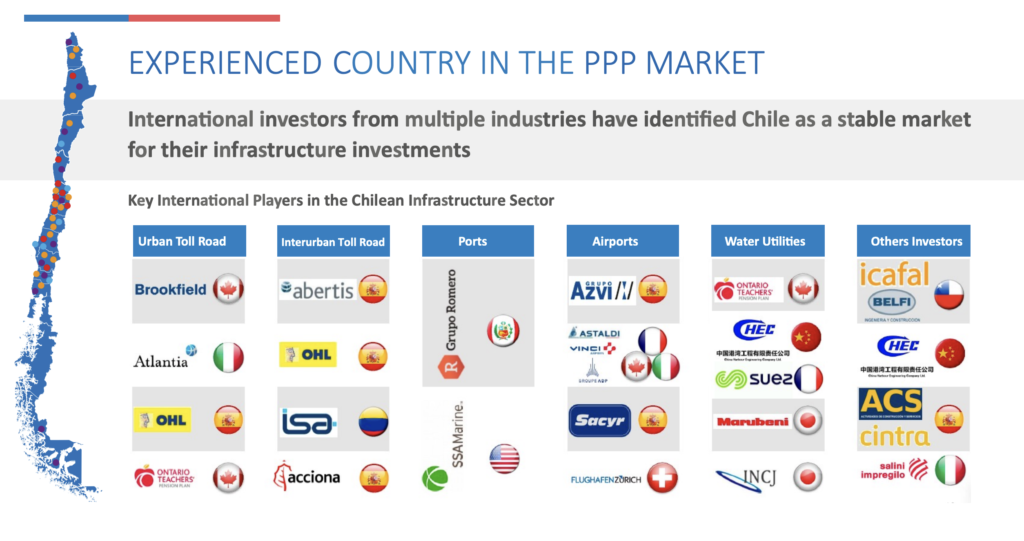 Infrastructure investment will play an important part in Chile’s economic recovery from the pandemic. The Chilean government recently announced the investment portfolio for 2022 which includes tenders for 12 contracts involving around US$4.7bn. Although lower than the US$6.1bn that was scheduled for 2021, it is still well above the annual average seen between 2010 and 2018. Here is the list of tenders for 2022 as reported by BNAmericas.

The Puerto Montt airport is currently operated under a US$30mn concession awarded in 2018. The contract is set to expire in May 2024 and the new contract would add the airports of Osorno and Chiloé island to the concession.

Atacama regional airport, second concession (US$79mn): Involves expanding the passenger terminal of the airport from the current 1,700m2 to 4,700m2, among other infrastructure upgrades.

The current concession was awarded to Sociedad Concesionaria Aeropuerto Regional de Atacama in 2002 and it is set to expire in May 2023.

Santiago airport light train (US$425mn): Originally presented as a private initiative by Engie, it entails a 12.5km light rail line linking Santiago’s international airport to two lines of the city’s metro system (lines No. 1 and No. 5).

Route 5 highway, Santiago-Los Vilos stretch (US$768mn): Involves the operation and improvement of 218km of the north-south artery between the capital and the port city of Los Vilos (Coquimbo region). Works include widening some sections, replacing bridges building new access roads.

The current concessionaire for this road is Globalvía subsidiary Autopista del Itata and its contract will expire in April 2023.

Route 5 highway. Temuco-Río Bueno stretch and Valdivia access (US$734mn): Involves improving 172km between the city of Temuco (Araucanía region) and Río Bueno (Los Ríos), plus the construction of a new 100km access road for regional capital Valdivia. The current contract will expire in 2025.

Route 5 highway. Antofagasta-Caldera stretch (US$628mn): Consists of widening 470km between the city of Antofagasta and Caldera (Atacama region). This section of route 5 has not been operated under a concession before.

Route 5 highway. Iquique-Antofagasta stretch (US$402mn): Involves widening a 370km stretch of highway between Iquique and Antofagasta. Like the Antofagasta-Caldera project, this consists of a new concession.

Zapallar reservoir (US$357mn): Entails building a dam with capacity for 80Mm3 (million cubic meters) and a 430m contention wall that will provide water for 10,000 hectares of land in the south-central Ñuble region.

Copiulemu-Hualqui-Puerto Coronel road corridor (US$144mn): Consists of building a 38.7km corridor linking the O-50 and 160 roads in the Biobío region . Works also include a 1.8km bridge over the Biobío River. The road is expected to serve as an alternative access to Puerto Coronel.

Villarrica highway (US$512mn): Involves widening a 48km stretch of the 199-CH road, which links the municipalities of Freire and Villarrica (Araucanía), plus a new road linking Villarrica and the tourist hotspot of Pucón, for a total of 86km.