Ecuador is emerging as a new mining jurisdiction in Latin America. The Ecuadorian Mines and Energy Ministry recently said that the government expects to generate over $4 billion in annual mining exports by 2025 with 4 new operations coming into operation before the end of President Guillermo Lasso’s term in 2025, including the Cascabel project, held by Australia’s SolGold. 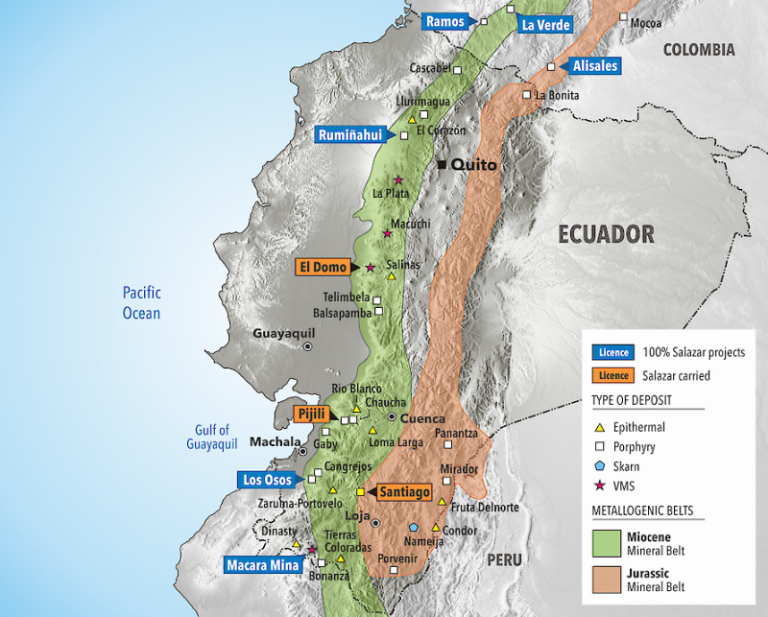 The company recently signed an Investment Contract with the Ecuadorian government that grants several incentives, such as reductions in income tax, exemption of import duties, tax stability, among others, that will last until March 2033.

Now company executives have stated that that they believe construction will start in 2024 after the environmental permits are obtained in the second half of 2023.

El Domo will be Ecuador’s third major mining operation after the Mirador copper mine and Lundin Gold’sm Fruta del Norte gold mine. It will be the first of several projects that could be built over the next few years in Ecuador. See project pipeline here.

The signing of the investment agreement with the Ecuadorian government is a good sign for the industry. Solaris Resources, another Canadian company, signed a very similar investment contract last week with the government of Ecuador for its open pit Warintza copper-gold project. The expectation is that this project will announce further progress in 2023.

In terms of El Domo, the operation is expected to bring $376 million in taxes and royalties into the state’s coffers over the 10-year mine life. Exploration continuous on its concessions which could further grow opportunities near the El Domo deposit.

For mining service and technology providers, the success of Ecuador could provide significant opportunities that will add to the already large project pipelines in Chile and Peru. All of these countries together create a massive opportunity for METS companies that have interesting services and products.

Ax Legal is an advisory firm that works with foreign companies in Latin America. Our team of legal and commercial advisors have a distinguished track record of helping foreign technology and services companies to grow and operate in Latin America. Over the years, we have worked with starts up, mid-size businesses, and publicly listed companies. The one common factor that connects our clients is that they are leaders in their field, providing innovative technologies and services to the industrial sectors.